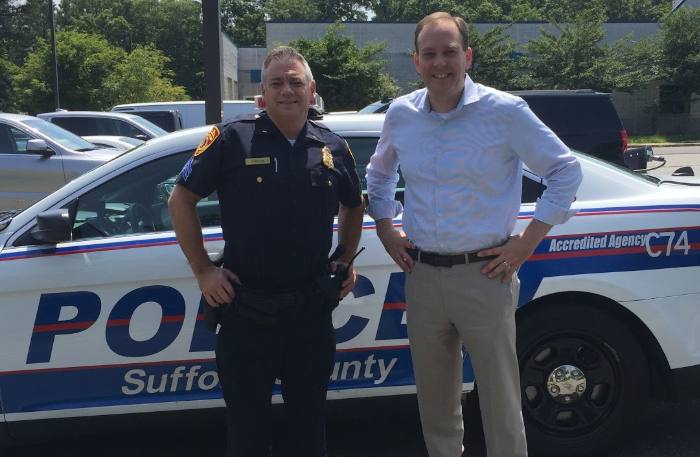 We’ve seen the disastrous results of Albany’s reckless new law eliminating cash bail and putting dangerous criminals back on our streets. While only the most extreme voices continue to defend this law, it is undeniable that it has already done irreparable harm to our communities and most vulnerable. Lee has been and will continue to be an outspoken opponent of this new law, urging state lawmakers to go back to Albany, repeal it in full, and fix the mess they created immediately.

Lee greatly prioritizes our public safety in many different ways and has led the fight against gang violence, including MS-13, that threatens our community here on Long Island. Lee introduced the Protecting Our Communities from Gang Violence Act, legislation that revokes citizenship from naturalized immigrants who abuse our system to engage in gang violence. He also introduced the Protect America Act to prevent terrorists from purchasing firearms, while protecting the due process rights of law-abiding Americans.

Every level of government has a role to play in combating the rise of MS-13 and other gangs. Lee has brought the President and senior administration officials to Long Island on multiple occasions to discuss this effort. Many of these gang members came into our country illegally, which is one of the reasons why we must improve our nation’s broken immigration system. Lee believes in opposing proposals that cut off cooperation and coordination between ICE and our local forces like sanctuary state/city policies and the Green Light Law.

Supporting local law enforcement’s ability to better protect our communities has been one of Lee’s top agenda items. Unfortunately, Albany has put our communities at risk with the Green Light Law which prevents state authorities from sharing information with the Department of Homeland Security to fight against drug trafficking, human trafficking, fraud, and crime on Long Island. Lee has been a strong advocate against the Green Light Law, which provides driver’s licenses to illegal immigrants.

The heroin and opioid abuse epidemic has wreaked havoc on our community. No family should have to lose a loved one as a result of addiction.

As a member of the House Bipartisan Task Force to Combat the Heroin Epidemic, Lee has supported over 20 pieces of legislation to provide our communities with the tools and resources we need to increase treatment, recovery, education, enforcement and prevention services.

He helped lead the successful bipartisan effort to pass the Comprehensive Addiction and Recovery Act (CARA) into law, which included $3.6 billion for substance abuse prevention and treatment and $8.3 billion in critical funding to combat the nation’s heroin and opioid abuse epidemic.

< Previous: DELIVERING FOR OUR FIRST RESPONDERS Next: ENSURING ACCESS TO OPPORTUNITY FOR OUR CHILDREN >